Finally…it comes down to this

The years was 2005. George Bush was president, the trials of Saddam Hussein had begun, surgeons in France had just carried out the first human face transplant (a mere 8 years after Face/Off), and I had first applied to the MFA program in Creative Writing at San Diego State University.

In spring 2006, I ended up declining an offer to attend, instead taking a job running a hostel in Redwood National Park with my wife and son (soon to be sons, plural). Okay, true–we actually got the offer to run the hostel first; not knowing if I would hear from any program, we moved up there and 2 weeks later came the call from SDSU. But we were happy where we were at and I said no thank you (or maybe I said “Uh…can I defer?”).

Fast forward four years. Barack Obama is president and the hostel closes due to an estimated $1 million in repairs. Time for Kaci and I to figure out what to do next. In the back of my head was that MFA I’d been itching to get. So I applied again and in Fall 2010 we moved to San Diego.

Well, fast forward again, this time to this afternoon (Obama still president) when I turned in my final 30 pages for the program. I’ll meet for feedback in a week or two, but yup, this means something. I’m done. Well, almost. 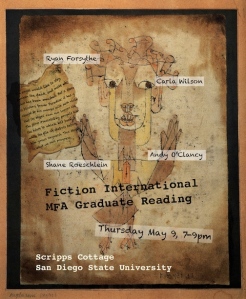 Thursday, May 9, at 7pm, I will be reading from my thesis, a novel about garbage, government, and growing up. Oh, and Faith No More. The evening is actually a collaboration of sorts with 3 of my good friends and colleagues, who will share their own work. We met Saturday night for a rehearsal and it looks like it’s going to be quite the event: live music, visuals including canned patriotic YouTube videos, humor, seriousness, limited edition chapbooks, and more. (We promise to keep things moving.)

So if you’re anywhere near San Diego State Thursday night, consider coming on out. Details on the Facebook event page.

About Ryan A Forsythe

Ryan Forsythe is a writer, editor, and artist from Cleveland, though he considers the state of Jefferson his home. He received a Master of Arts degree in Teaching Writing from Humboldt State University and an MFA in Fiction from San Diego State University, where he also served as Associate Editor with Fiction International. Ryan writes short fiction, novels, travel stories, family history, personal essays, children's books (for adults), and the occasional poem. His writing has earned two Pushcart Prize nominations, a Best in Show at the local county fair, a "Great 69-er Award" (for best 69-word fiction), and more. His novel, "Dick Cheney Saves Paris," was released by Love Earth Publications on August 30, 2011, the same day Cheney's own memoir was released.
View all posts by Ryan A Forsythe →
This entry was posted in Uncategorized. Bookmark the permalink.

1 Response to Finally…it comes down to this